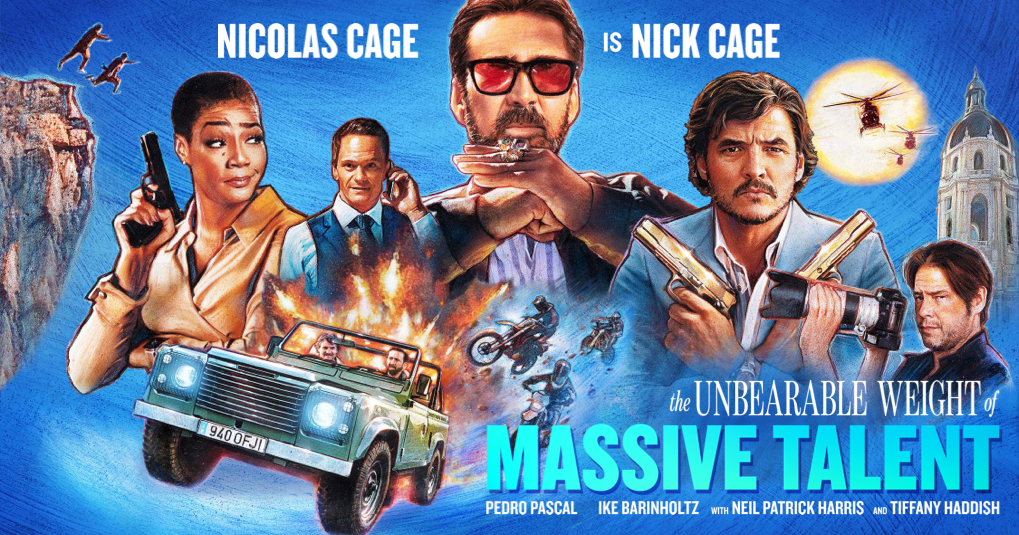 There is some weird sort of magnetism to Nicolas Cage that just seems to pull people into his movies, almost regardless of quality. And that is an important thing to note, because quality is frequently in question when it comes to his movies. The man is essentially now a living meme, and his history is about as deeply unbelievable as it can be while still being true. So, a movie, like The Unbearable Weight of Massive Talent, where he plays himself in a super meta commentary on that weirdness is exceptionally tempting, but really its hard to believe its gonna work. Especially from a director with a spotty history at best. But maybe, just maybe, his own crazed charisma can be warped into a good movie that feels so close to our own reality.

So what is this meta weird movie about? Well, Nicolas Cage plays…Nicolas Cage. An eccentric actor with a passion for working in film and trying to get the role of a lifetime if he can. But at the same time is struggling with his own inner demons, and their impacts on his family that led to his divorce from his wife Olivia (Sharon Horgan) and his difficulty connecting with his daughter Addy (Lily Mo Sheen). As debts stack up, and roles are lost, Nic’s manager Fink (Neil Patrick Harris) brings him an invitation to attend a rich fan’s birthday in Spain for $1,000,000 that he has to take, and then he plans to give up acting. When he gets there he finds the fan Javi (Pedro Pascal) is a social awkward dork with a massive compound, who is trying so hard to befriend Nic and get him in his movie. Bit its not long before we find that Javi may be into some bad things as CIA agents Vivian (Tiffany Haddish) and Martin (Ike Barinholtz) are monitoring him, and they quickly enlist Nic to help them spy on Javi. What follows is a best buddy bromance movie with spy intrigue, humor, mishaps, Nic Cage Fandom, and oh so very much meta.

I gotta start off and say that I am a little shocked and super pleasantly surprised by just how well this seriously works. Writer-Director Tom Gormican has a super spotty record with his IMDB being the film That Awkward Moment and writing for the much-maligned TV Show Ghosted. But in this film, he seems like a totally different person. The writing is generally sharp and witty as he makes Nic Cage references from all segments of his career, some that are even so subtle you may not catch on the first viewing, while building a narrative that never feels cluttered. The dialog is full of meta callouts not just to Cage though, they’re even to the film itself. As he has Cage and Javi writing a script together, they’re trying to make “A mature film about two friends” and then call out that it needs some intrigue as a hook, and this film does just that with the CIA angle and the last act. I really don’t want to spoil more than that, because the way its layered is really a joy and I absolutely love that you really end up struck by that realization. While some of that narrative stuff can be played out, and be very traditional Cage Action Movie style, it plays so well into the meta intent, while also being a best version of that kind of action, that you really can’t fault it.

As far as performances, well, there are a reasonable amount of actors in this movie, but the only two you need to really spend time on are Cage and Pascal. Not to discount any of the others, they all do a great job. Haddish puts in one of my favorite recent performances from them as they don’t go too large and really are fun here. Also credit to Barinholtz who I always like. He doesn’t get a lot to do here, but he gets some of the best jokes when he is on screen and just nails them. But, seriously, most of the movie is just Cage and Pascal, and they legitimately make this movie work at all, and to the highest degree. Cage is playing this exaggerated (well, maybe exaggerated…man its hard to say with him) version of himself with so much energy and commitment that it just feels real based on some of his more extreme performances. There are moments of him being downright out of his mind, and they are so unexpected and charming in their craziness that its hard to imagine anyone else could’ve been in a movie like this. And his chemistry with Pascal is so absolutely pure and natural on screen that you just feel so sorry for them when they are ever at odds because you can tell they hate it. Pascal brings so much and honestly might even steal the show from Cage. The man is basically charisma incarnate it feels like, and he literally has downright puppy dog eyes when trying to get Cage to like him and you will have a hard time not falling in love with him. By the turn in the film you really hope he’s not the deranged monster the CIA claims he is because you like him too. Seeing him and Cage dropping Acid together and freaking out, or sharing their love for cinema feels like spending time with your own best friend and I just love it.

The film is far from perfect, but I honestly have a hard time not singing its praise. It has some clever transitions between scenes that my nerdy editor brain latched on to and adored. And the scenery of their Spanish locale and massive mansion set are on wonderful display and really just enhance the film as the beauty feels calming around the madness within the scenes. And they keep all this story in a film that is under an hour, without feeling crowded. That’s pretty stellar because it never feels slow either. But, still, some of the action is very typical Cage action that isn’t generally the most original. And sometimes you wonder if you really do just want that “mature film about two male friends” they’re writing instead of that action, because I could spend hours more watching these two. But as I said earlier, the meta nature also supports the twists into action film and the way they handle that final turn transition is so just absolutely fun that I think it got one of the biggest cheers in the theater.

It’s hard to understate how much fun I had with this movie, and I really look forward to seeing it again. It isn’t perfect, and I score off its overall quality and flaws, but I have to tell you I just absolutely adore this movie too. Its maybe a favorite of this year so far because it just does everything it sets out to do so well, and that is generally to just please the audience. I kinda even want a sequel just for more of Pascal and Cage together so we can see them on some other adventure. I personally want a National Treasure 2 kind of adventure movie for that one, just to also parody that film as it has so much content to be parodied. But, honestly, this is a movie that can really help you in a dark mood, or make a good day brighter, and I so very highly recommend you see it.